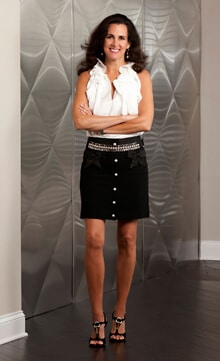 Linda began sewing with her mother at the age of ten mixing tops and bottoms of Vogue patterns with colorful fabrics. She graduated from Florida State University in 1982 with a degree in fashion design where she won first place in the Mildred Pepper Design Awards.

Her first job out of college was designing gowns for clients at a fabric store in Jacksonville, Florida. She opened her own studio a few years later and began dreaming up a signature line of her own. Linda was selected to show with the prestigious American International Designers at the Waldorf Astoria in New York City in 1996.