Linda grew up in Jacksonville and continues to love this great city. With a goal of being close to downtown, she purchased her building on Kings Avenue back in 1999. As more businesses move into the Southbank area, Kings Avenue could once again become a popular entry point to downtown Jacksonville. The text below was taken from an article recently published in First Coast Magazine about Linda and the “Kings Avenue Creatives”.

At first glance, you may not notice the group of innovative businesses that line Kings Avenue on the Southbank of downtown, but there is a group of creatives working to change that. Fashion designer, Linda Cunningham and a collective of neighboring business owners met over beers one day at Aardwolf Brewery in San Marco. The group realized that their companies were all operating with little more than three degrees of separation. Collaboration was already happening between them, and the idea of creating a way to better build synergy between their businesses just made sense.

“Linda is like the Mayor of Kings Avenue. She has been a great catalyst, and is one of the most hardworking, creative and dedicated people I have ever met,” says Karen Burdette founder of Burdette Ketchum, a marketing agency located on the street. Cunningham, a Jacksonville native, launched her career in fashion on the First Coast in the late 1980s.

“I grew up here and loved Jacksonville. When I graduated from college, I knew I wanted to stay here because of the river and the ocean,” says Cunningham. “I am a hometown girl, and I just didn’t think there was anything out there better than what we already have,” she says.

Cunningham’s designs can be found in boutiques across the country, and her wholesale collection is shown through the Collective Designers group at the Essex House during New York Fashion week. In 1999, she bought her building on Kings Avenue. It was once an old beauty supply store, and she completely transformed it into a fashion house within three years. The reason she moved her company to the street on the Southbank was to make parking more accommodating for customers.

“I felt like if I could come down here, where there wasn’t a lot of retail, my clients could have parking spaces instead of calling and saying, ‘It’s 10 am and I am circling around,’” says Cunningham. 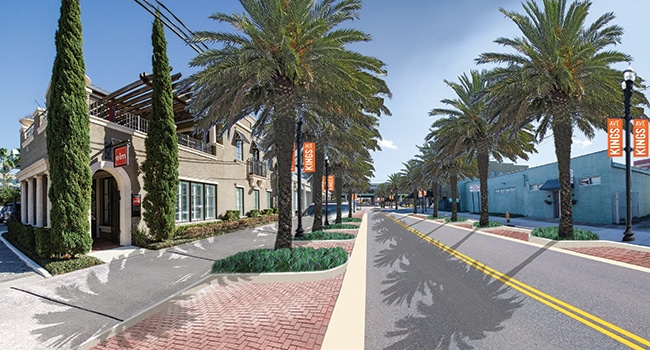